With a summer heatwave well and truly upon us, it’s good news that a new ice cream parlour has opened in the St David’s shopping centre in Cardiff. I eat ice cream once in a blue moon, so when I have it, I like it to be really good – so it was with some trepidation that I went to try Joe Delucci’s wares after being invited to have a free scoop! I didn’t want to waste all those calories on something that wasn’t lovely.

Joe Delucci’s is a small chain of ice cream parlours that serve “remarkable Italian ice cream” which is made without the ‘bad stuff’ often found in today’s ice cream. There’s nothing quite like real Italian gelato, and the flavours on offer certainly looked appealing – really nicely presented in the display cabinet. The two staff who were on duty when I went along were both extremely friendly and cheerful, despite it being a quiet weekday lunchtime with relatively few customers. 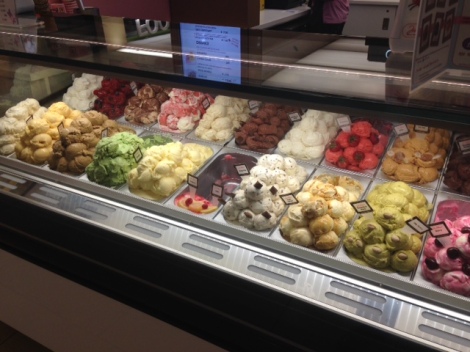 I wasn’t sure what flavour to try, but was persuaded to go for a scoop of their flavour of the day, caramel (which I was allowed to try a small spoonful of before taking the plunge) and was shamelessly upsold by the staff member’s enthusiasm about how good it tastes when combined with banana, so that was my second scoop!

I really enjoyed the ice cream. It was creamy without being sickly, and the flavours were fresh and authentic. Banana can either be fantastic or absolutely awful, depending on how synthetic it tastes, but I’m pleased to report that the natural flavours used in Joe Delucci’s gelato really shone through in this one. I only eat ice cream when the weather is really hot, so a refreshing texture that isn’t too rich goes down well with me.

As well as ice cream, Joe Delucci’s serves milkshakes and other drinks, and a really nice touch is their signature Vespa scooter seats at the end of the bar if you want to eat or drink ‘in’ (admittedly, you’re kind of in the centre of the shopping centre, which feels more ‘out’ than ‘in’ but it’s still a bit of fun which will no doubt appeal to children!)

Since its opening I’ve noticed Joe Delucci’s becoming progressively busier each time I walk past it, so it’s clearly a welcome addition to St David’s that is going down well with visitors.

Thank you to Joe Delucci’s for my free scoop of gelato.

One response to “Chill out after a day’s shopping! – Review: Joe Delucci’s, St David’s, Cardiff”