A few weeks ago, Mr W and I, along with some of his family, paid a very long-overdue first visit to The Walnut Tree in Abergavenny, one of the few Michelin starred restaurants in Wales, run by chef Shaun Hill, who we had seen giving a demonstration at 2013’s Abergavenny Food Festival, and since then we’d been keen to visit his restaurant and try his food for ourselves.

The Walnut Tree has been a renowned venue since the 1960s in various incarnations, and under Shaun’s leadership it offers “proper dining and drinking in an informal setting”. On the outside, it looks like a pub – a very nice one at that – and the informality continues inside with simply furnished dining areas and minimal table settings. You even have to go outside to visit the toilets – but rest assured the toilets themselves have every modern convenience, you’d just need to take an umbrella with you if it was raining! A plus point to this is that you get to pass by a big window into the kitchen so you can see what the chefs are getting up to as they prepare your dinner.

We started with a drink in the bar (while we studied the menu and the lovely wine list) and were served an amuse bouche of cream cheese with smoked salmon and caviar served on a rosti. This set the tone for the meal by being excellent! 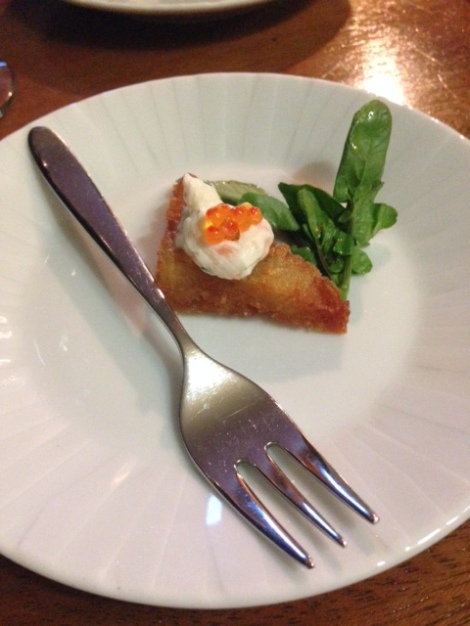 To start, I chose chicken liver and foie gras parfait with damson cheese (the latter brought back childhood memories of making this with damsons picked from a local orchard in the village where I grew up!) The parfait was served in a simple quenelle and was light and smooth, without being moussey. The damson cheese was a nice accompaniment but not quite sharp enough for me – and there also wasn’t quite enough of it. The brioche style bread that was served for the table was fantastic and went very well with the parfait.

Mr W opted for veal sweetbreads with potato and olive cake (of course leading to the inevitable “So what are sweetbreads?” discussion around the table!) I’m not a fan of sweetbreads, so although I tried the dish and enjoyed the flavours, it wasn’t a favourite for me, but Mr W loved it, as did his cousin who had the same thing – they both felt that the sweetbreads were cooked perfectly. Other diners in our party chose monkfish with tomato, chilli and ginger, which had similarly rave reviews.

My main was a loin of Berkshire pork, belly and cheek, which was served with cabbage, mash, crackling and a delicious rich sauce. This was an outstanding dish for me – succulent cuts of pork, the belly being a particular favourite with the fat rendered perfectly and the skin crisp and delicious. The accompaniments were fantastic too and Mr W who is something of a connoisseur of crackling really rated that element of it.

Mr W chose rack and neck of lamb with spring vegetable stew. Unfortunately my photograph of that dish was so appalling that I can’t share it with you, which is a real shame as it was a beautiful dish, with the fresh, bright colours of spring vegetables alongside the pink lamb. It tasted as good as it looked, too, so I’m particularl sorry about the lack of photo.

My pudding was an apricot streusel tart with vanilla ice cream. The sharpness of the apricot was appropriately tempered by the vanilla, and both the pastry and streusel topping could not be faulted in their texture and crispness.

Mr W, who never chooses a chocolate dessert, surprised us all by going for one: a fondant served with cherries. This was another excellent dish. 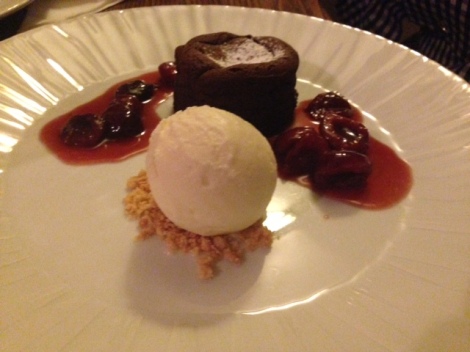 We were also tempted by the cheese selection – each cheese can be ordered separately, but comes with a glass of a selected alcoholic beverage on the side. One of our party tried the Lancashire Bomb (after a bit of badgering from me as it came with not only a glass of Banyuls but also an Eccles cake!) The cheese was fantastic but you’d probably be better off going for cheese if others on the table were too, as you could mix and match, rather than just having one type of cheese in splendid isolation (albeit with an Eccles cake on the side in this case!)

Service was fantastic all night long. Every staff member we dealt with was friendly, knowledgeable and had that effortless combination of relaxedness with impeccable attention to detail that you’d expect in an establishment with a Michelin star. All too often, ‘wannabe’ fine dining restaurants (I’m looking at you, Duck Egg Bleu) seem to think that their service needs to be stuffy, aloof and overly formal; they could take a lesson or two from the fantastic staff we met at the Walnut Tree. We had a particularly funny moment, which inspired the title of this review, when Mr W’s pudding arrived and I told him to “make some room” on the table and our waitress became extremely apologetic about the chocolate fondant she was delivering as she thought I’d said that he’d ordered macaroons (another option on the pudding menu).

The Walnut Tree was just as good as I’d expected it to be, serving simple dishes with innovation where it adds something, but not for the sake of it, and I’d love to go back.