There’s been yet another exciting foodie arrival in Penarth of late: Washington Tea, which has taken over the old Washington Gallery site, which had its own tea shop which was briefly (and unsuccessfully) taken over by Foxy’s Deli before the owners of the very successful Waterloo Gardens Teahouse  in Penylan decided to move in and make the whole premises into a tearoom.

Mr W and I had already visited during the day and had found it a pleasant venue for tea, coffee and cake – especially if you’re a lover of, or even just interested in, unusual teas, so we were pleased to be invited along to the inaugural evening opening for their ‘Food and Tea’ supper club. The plan is that they will open every other Friday evening, serving a 5 course meal with each course paired with a different tea.

On the night that we went along, the place was packed, with a buzzing group of eager diners anticipating the meal. We weren’t sure whether to expect a ‘supper club’ type set up with group tables, but we ended up with our own table – the table set up being broadly similar to the daytime arrangement. We ordered a bottle of wine from the modest (and relatively inexpensive) wine list as we weren’t sure if the teas would be enough!

We were interested to discover that the menu was broadly vegetarian. On speaking to Kas, the owner, who was there chatting to us all, he told us that the restrictions of preparing a five course evening meal for a large group in a kitchen usually reserved for tea room type preparation had meant that a lot of the dishes needed to be pre-prepared – and vegetarian food lent itself better to this, hence the menu choices.

We started with an organic chard and herb soup, served alongside crispy filo rolls of feta, chard and pine nuts. The filo rolls were a hit with me – the chard and feta were a great pairing. They were crying out to be dipped in something too, so serving them with the soup, which was tasty and quite refreshing, was a winning idea! This was followed by (we discovered that the paired teas were served after each course, rather than alongside it) a glass of interestingly named ‘Hairy Monkey’ tea, a white tea from China.

Just one of our paired teas

Next up was raw parsnip, Welsh shitake mushroom, avocado and spring onion maki, served with wasabi crème fraiche, soy sauce and pickled ginger. This was an interesting take on traditional maki rolls, with the rice being replaced by very finely chopped raw parsnip. It was our least favourite course, as neither of us was particularly keen on the raw parsnip concept – even finely chopped it felt as if it was going to be indigestible, and the flavour was a bit overpowering – although all of the other flavours worked well and the wasabi crème fraiche was a pleasant addition – we would have preferred the more traditional rice option! This was appropriately paired with a Japanese green tea, Genmaicha. 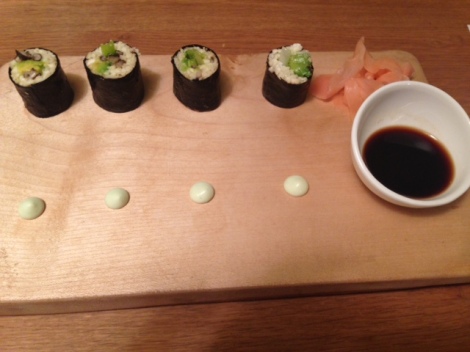 The only non-vegetarian course came next: Dukkah coated pan-fried scallops on a bed of cauliflower and apple puree, served with organic leaves. It was ambitious that the one dish that they had to cook in real time, on the night, was something that’s as time critical as scallops, but they did an excellent job, and the scallops were cooked perfectly. Cauliflower and apple with scallops is a heavenly combination in my book, so this was definitely my favourite course of the evening. It came with a glass of The Awakening black tea from India. 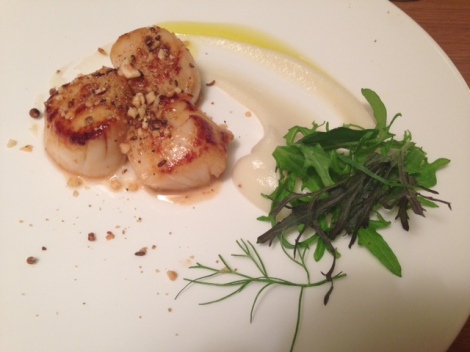 The final savoury course was organic pumpkin and beets cooked with Moroccan spice, chickpeas and apricots, served with jewelled couscous and homemade flatbreads. This was a tasty dish that looked beautiful, and I’m a big fan of couscous so I really enjoyed it. A peppermint rooibos was a suitable aid to digestion after four courses were down! 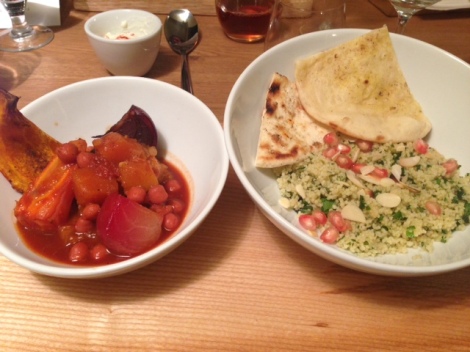 Final course of the evening was dark chocolate and rum torte served with a raspberry coulis and Amaretto cream. As you’d hope in a place that specialises in cakes, this was bang on – a rich, dense torte, perfectly complemented by the sharp coulis and silky cream. If I had to be really critical I’d say I could have done with a bit more coulis, but this is only my personal preference as I do tend to drown food in sauce, given the chance! As with all the previous dishes, the presentation was beautiful.

We enjoyed our evening at Washington Tea. There was definitely a nice buzz in the room amongst the guests, and it’s amazing how well the tea room transformed into an evening venue. All of the staff were very helpful and enthusiastic, and talked to us about each of the dishes and teas, although at times the service was a little frantic, and some of the staff looked as if they could do with a cold shower and/or a lie down in a dark room by the end of the evening! This was no doubt partly due to it being the first evening of its kind, but it was sometimes very evident that the set up didn’t lend itself well to serving a relatively large number of covers all at the same time and there were a few lengthy waits between courses and quite a bit of running around that was only partly ‘behind the scenes’ (again, due to the set up!)

That said, the food was very good, albeit we felt that despite the quality of each individual dish in terms of taste, innovation and presentation, the menu as a whole didn’t hang together that well as it tried to encompass too many different cuisines. It was also a bit odd to have a ‘mostly vegetarian’ menu. Despite the fact that the scallops were the dish I enjoyed most, this was probably because I hadn’t been expecting a predominantly meat-free evening. I actually think they’d be better off planning to do a wholly vegetarian/vegan/wholefood evening, as this in itself could be an attraction, and sits quite nicely with the concept of the paired teas. Having spoken to Kas, he’s said that it’s likely the ‘mostly vegetarian’ concept will continue, but with efforts to challenge the perceptions that vegetarian food is often stodgy or boring – and the dishes we tried certainly made a successful challenge as they were neither of these things! He’s also said that they may invite guest chefs to cook on future evenings who will develop menus that play to their individual strengths.

For us, the tea pairings were interesting, and it was good to try some different ones as I’m a bit of an ignoramus in this department. It piqued my interest in getting to know and understand a bit more about the myriad of different varieties available – and Washington Tea is definitely somewhere that I intend to go back to in order to do this, although for me tea definitely works better with cake than with an evening meal.

The food scene in Penarth seems to be going from strength to strength, and it’s great to have yet another new venue in town, and one that’s doing things a little bit differently.

We were invited to the Food and Tea supper club as guests and as such our food and teas were complimentary. The meal with paired teas is normally charged at £35 per head.

One response to “Tea for five…courses – Supper club review: Food and Tea at Washington Tea, Penarth, Vale of Glamorgan”