Regular readers will know that I am a huge fan of Hotel Chocolat’s range of luxury chocolates. There’s little, if anything, that I’ve tried from the range that I haven’t liked, but when I was asked if I’d like to try some products from their ‘Cocoa Cuisine’ range, I was a little apprehensive that I might find a Hotel Chocolat product that I wasn’t so keen on! 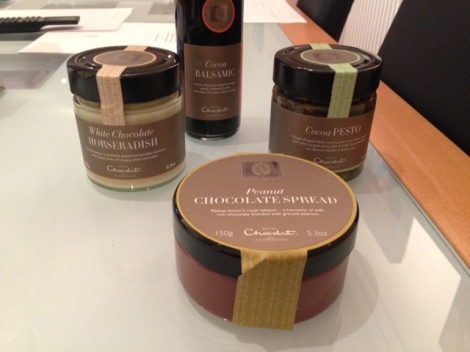 The Peanut Chocolate Spread was probably the most ‘normal’ of the four. It had the texture of really good quality peanut butter, not too sweet or creamy, but more like a nut butter that you’d buy from a wholefood shop. It had the colour of chocolate spread, but the overwhelming flavour was peanut, with a mere hint of chocolate. I tried it on toast, which was a nice breakfast treat, and – as the packaging suggested – I also tried it with a spoon straight from the jar. Obviously I would never have done this had it not been a serving suggestion!

The Cocoa Balsamic is balsamic vinegar with roasted cocoa nibs. This one suggests you use it as a dip, a dressing, or in cooking. I tried it with bread and olive oil and also used it in a couple of tomato-based pasta sauces for a bit of extra flavour. I even added some to chilli con carne, knowing that a lot of chilli recipes suggest adding chocolate. I really liked the balsamic – the cocoa seemed to add a rounder flavour to the sharpness of the vinegar – and it is a nice talking point if you’re serving bread with dipping oil and vinegar to guests. Normally, it’s the oils that come with different flavourings, so a flavoured balsamic made a nice change, although there wasn’t an overwhelmingly chocolatey flavour, so anyone buying it as a chocoaholic might be disappointed.

The Cocoa Pesto again adds roasted cocoa nibs to traditional basil pesto. I was unsure about this one before I even opened it, as I always make my own pesto and find it infinitely more tasty than the shop-bought versions, which are often too oily and lack that delicious fresh basil flavour. Happily, even without the cocoa nibs, this was one of the better jar-based pestos I’ve tried: a strong basil flavour, not too much oil and nice crunchy pieces of pine nut. There wasn’t much of a cheesy flavour to it, however – perhaps because this really wouldn’t have gone with the cocoa. As with the balsamic, there wasn’t an especially chocolatey flavour, but the cocoa added an interesting extra dimension. I tried this mixed with some couscous, some pasta and also as a spread on some crusty bread.

Last up was the White Chocolate Horseradish. Mr W loves really hot horseradish, so this wasn’t really for him, as the white chocolate gave it a creamier, softer edge. It also wasn’t particularly coarsely cut, but rather a smooth-looking paste. With roast beef, I’m not sure that the white chocolate added anything more than you’d expect from ‘normal’ horseradish. Where I think it would work really well, however, is stirred into mashed potato to go with a beef stew.

I did worry that some of these products might be too gimmicky for me – chocolate for the sake of chocolate being added to things that chocolate just doesn’t go with – but in fact, all of the products were really good in their own right, with the chocolate adding an extra, often not particularly chocolatey, dimension! Anyone with a really sweet tooth, or looking for a novelty gift would probably be a bit disappointed, but for food lovers who like to try cooking with new ingredients, these are genuinely interesting, good quality products. There’s a whole range of Cocoa Cuisine products. Some of the other unusual ones I’d really like to try include Chateau Chocolat Red Wine, Savoury Cocoa Mayo, Cocoa Pasta and Cocoa Gin – and there are other offerings that combine more normally paired flavours, such as salted caramel and pecan chocolate spread, and some delicious sounding chocolate biscuits. I’d recommend that – with the festive season approaching alarmingly quickly – anyone looking for Christmas gift ideas for foodies should check out what Hotel Chocolat has to offer! I popped into the Cardiff branch recently and they have a number of items in the range available there, but otherwise the full range is available on the Hotel Chocolat website.

Thank you to Hotel Chocolat for my complementary products.