New restaurants come and (unfortunately) go in Cardiff all the time, but one that arrived recently and hasn’t escaped most people’s notice is Viva Brazil, with its prime location in the ground floor of the Maldron Hotel, right next door to the Central station. Viva Brazil is one of a small but growing chain of Brazilian Churrascarias – which translates roughly from the Portugese as ‘barbecue’. It certainly looks impressive from the outside, so we went along recently to see if it delivered the goods on the inside.

We started off in the bar, where a Brazilian style band was playing, and I had a couple of cocktails from their impressive selection of classics and innovations, including some tempting dessert cocktails and a diverse selection of Caipirinhas. Unfortunately my first impression wasn’t great – although the coctkails were pretty good (especially the Pineapple and Cinnamon Mojito), the service was very, very slow. We ordered at the bar, and were told that if we sat down at one of the bar tables, our drinks would be brought over to us. It transpired that what this actually meant was “stop standing over me so I can put off making your drink while I make up massive drinks orders for tables in the restaurant instead.” With both rounds of drinks that we ordered, Mr W was over half way through his glass of wine before my cocktail was brought over.

As far as food was concerned, I had little idea of what to expect, having not done my research beforehand! I have to confess to being a bit put off when I found out that the concept of the Brazilian ‘rodizio’ is essentially an ‘all you can eat’ affair. Much as I love food, I dislike gluttony almost as much, and am not a fan of all you can eat buffets as I find seeing people with plates piled excessively high with food a bit of a turn off, and the same goes for decimated dishes of salad that have been hanging around for far too long. Fortunately, Viva Brazil has a bit of a twist to it, so although we went and helped ourselves initially to a selection from salads, bread, cold meats, cheeses, side dishes and stews from the central buffet area, or ‘salad island’, the rest of the all you can eat event is served at your table.

In Viva Brazil, up to fifteen different meats are on offer, and diners are given a card to place on their table with either the green or red side uppermost, depending on whether they want more food to be brought to them. If you’re on green, then this signals to the ‘passadors’, who continually do the rounds of the tables armed with various barbecued meats on skewers and a big knife, that they should stop by your table with whatever meat they have on offer. They’ll tell you what it is, and if you want some, they’ll carve it for you, and you grab a piece with the tongs on your table. All of the meats are listed on the menu card, and there are different pricing options depending on whether you have the full ‘rodizio’ (all the meats), just salad, or add fish to your meal. Lunch is £13.95 per head for the full rodizio, dinner is £23.95, and Sunday is £19.95 but that includes desserts.

The food on the buffet was varied and very fresh. To be honest, I probably could have made a meal from that alone, but tried to be fairly conservative in my choices as I wanted to make the most of the meats on offer.

We managed to try a few different meats during our meal: gammon, a couple of cuts of steak (there are numerous different ones on the menu), lamb, Brazilian pork sausages and also pineapple were served at our table. All of the meat we tried was cooked very well, seemed exceptionally fresh (the good thing about this concept is that the food won’t be hanging around for long!) and seemed to be good quality. Other options on the menu included chicken hearts, chicken legs, yet more cuts of steak, pork and beef ribs. 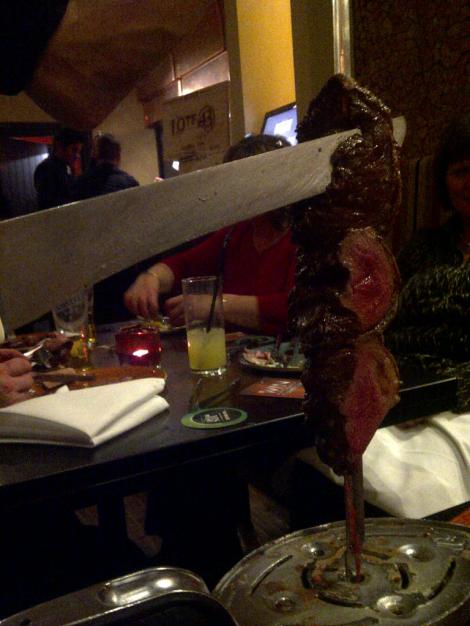 I can see why this concept really appeals to many people. There’s the obvious attraction, for many, of the all you can eat idea – one table next to ours had one diner who continued to say yes to every passing meat for a good half hour after his fellow diners had thrown in the towel, and a diner on the other side of us looked as if he was about to explode (admittedly, he may have looked like this when he arrived). Also, it’s a fun, sociable concept, and the place has a buzzing, bustling atmosphere as the staff constantly circulate with different meat.

For me, personally, it didn’t quite hit the mark, as it failed to tick many of the boxes for what I enjoy most about eating out: having my tastebuds tantalised by a tempting menu, waiting excitedly for my choice and enjoying beautiful presentation when the food arrives. It’s also pot luck as to whether a meat you particularly fancy happens to be passing your table when your card is on green, and if you’ve got a limited appetite, you don’t know whether to say no to some of the early options in case something better comes along later. Had I set my heart on, say, chicken hearts, I’d have been disappointed. Also, had I known I was going to be mostly eating lamb, beef and sausages, I perhaps would have opted for different side dishes from the salad island. Saying that, though, for what it is, it’s great and can’t be faulted (other than the slow service at the bar, which is the reason why it doesn’t get a better score for service – the service at our table was excellent).

For the right occasion, I’d say give Viva Brazil a go. It’s essentially a ‘novelty’ concept (at least in Cardiff!) and has the potential to be good fun for a big group, especially if meat lovers, children, gluttons or fussy eaters are amongst you. I’ll be interested to see whether it’s still around in a few years’ time, when, perhaps, the novelty may have worn off.