It’s a rare occasion that we go out for a Chinese meal, as although I enjoy Chinese food, it’s not my favourite cuisine, so when I do eat it, I want it to be really good!

A recent Saturday night was one of those rare occasions when we both fancied Chinese, so we decided to visit Pearl of the Orient, upstairs in Mermaid Quay at the Bay. A few years ago, there was a separate Bar Orient downstairs from the venue, but that is long gone, and Bar Orient is now part of the restaurant upstairs.

We were hoping to be able to have a ‘banquet’ type menu – I like to try lots of dishes, and don’t have a particular favourite Chinese dish, so it’s good to be able to have a selection – and besides, I often find the selection of dishes on offer a bit mind boggling. Unfortunately, despite there being quite a few different set menus, they were all for a minimum of four people, so we weren’t able to do what we planned – which was the first disappointment!

Onwards and upwards, we thought the next best thing would be to have mixed hors d’oeuvres, an intermediate course of crispy aromatic duck and a couple of different main courses, but we then discovered that the smallest quantity of duck available was a half, for the princely sum of £20! It would have been way too much food for two people, not to mention an extortionate price for what is effectively an additional course.

We eventually decided to opt for the Winter special menu, which offered two courses from a small selection of starters and mains for £12.90, with duck available for £5 per person extra.

I chose mixed dim sum to start. These were very hot when they came to the table, which was good, but they were not amongst the best I’ve tried, with the fillings mostly being a bit non-descript – with the exception of a pork one which was gristly and unpleasant. 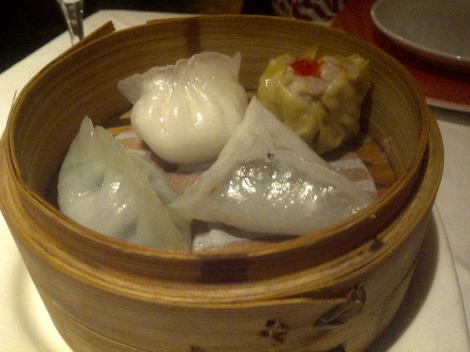 Mr W chose barbecue spare ribs, and these were tasty, not too fatty, not drowning in sauce, and came in a generous portion, so were one of the best dishes of the meal. We had hoped to add some sesame prawn toast to our order, but at £6 a portion from the a la carte menu, we decided against it!

The crispy aromatic duck was excellent, tasty and cooked very well, although it could have done with being hotter, as could the pancakes, which although plentiful and not at all stuck together, came in a steam basket without a lid on, so instantly went cold. The cucumber and spring onion definitely looked as if they’d been prepared several hours before and had been hanging around, drying out, for some time. I think we ended up with about a quarter of a duck, so it’s a shame that they don’t offer this quantity on the a la carte, particularly because people having it as part of an a la carte meal would be spending more money than those of us on the set menu – but there we go! 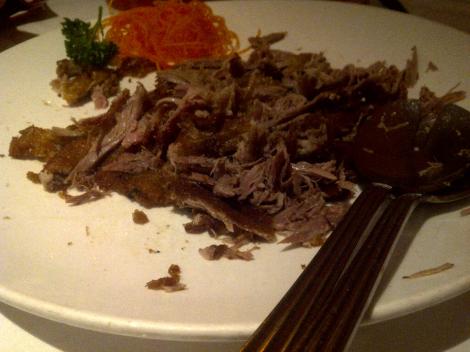 For our mains, we had Szechuan Kung Po chicken, which was tasty, spicy and had plenty of chicken pieces, and pan fried rump steak in Peking sauce (which attracted a £1 supplement), which was also very tasty. The meat in both dishes seemed to be good quality, and the sauces weren’t gloopy or gelatinous (this often puts me off with takeaway Chinese food!) Both were served with fragrant steamed jasmine rice (we could have chosen different accompaniments for a further supplement) which was disappointingly stuck together and tasteless. Throughout the meal, the food was very good in places, but let down by small things, like the rice, the cold pancakes and the gristly dim sum, hence only 3 stars.

The service throughout our meal was efficient, but brusque to say the least, and the thing that particularly irritated me was one waiter’s insistence on topping up our wine glasses every time he passed our table, to the point that they were at times almost full to the brim. When, just before our main course was served, he managed to fill both of them again and finally empty the bottle, he triumphantly asked “another bottle?” They’re clearly under instruction to upsell as much as possible on the wine, and whilst I don’t mind friendly, informed recommendations for extra dishes, drinks etc. it was done in a very unhelpful way and would have put me off ordering another bottle of wine even if we’d wanted one!

Ambience was also a little bit lacking. The bar feels more like a waiting area, and I can’t ever imagine going in there just for a drink – although the cocktails were surprisingly reasonable compared with other venues nearby. I didn’t try one, so I can’t tell you whether the price reflected the quality! Decorative fish tanks around the walls and along the counter seemed almost empty, save for a couple of tiny fish we spotted swimming around forlornly in one, and the place felt a little bit tired.

Now, I know that Chinese food is notoriously expensive when you eat out, and I really don’t mind paying the going rate for good food – but with a few provisos! The first one is that I don’t want to be restricted from parts of the menu because of being a small party size. I was really disappointed not to have the option to try at least set menu, and would even have paid a supplement because there were only two of us, but this wasn’t possible. For two of us to have a real variety of food, we’d have had to have spent a small fortune and ended up with loads left over. The second is that I expect the service and atmosphere to match up to the price I am paying – and on this occasion, it didn’t. Even with the menu we ended up choosing from, our meal wasn’t particularly cheap – and I kind of expected it to be, given we were choosing from a vastly restricted menu. By the time we’d added wine and the various supplements it was £60 for the two of us, and the quality of the food was good, but not outstanding. I appreciate businesses need to find ways to make money, and a lot of the issues I experienced can be explained by this, but they’re only going to make any money at all if they keep their customers happy, and on this occasion, they didn’t.

3 responses to “Top me up, buttercup! – Restaurant review: Pearl of the Orient, Cardiff Bay”