Something unusual happened this week: “I know where we’re going for dinner!” I said, as I met Mr W after work.

He was surprised. I’m not the most decisive of people under normal circumstances, but as I’d walked down Mill Lane moments earlier, Bill’s, a newly opened venue, had caught my eye – it looked cosy, busy and generally very inviting, and I wanted to go! Bill’s has taken over several units in the Wyndham Arcade, and, despite being one of numerous restaurants along that stretch of Mill Lane, it was very busy when we arrived just after 7 p.m. on a Thursday night. Since the Cardiff institution that is Kiwi’s has moved out of the Arcade and into St Mary’s Street, the Arcade now closes at night, making it a safer and generally more pleasant place to be after dark.

Bill’s is part of a small chain of 6 outlets owned by Richard Caring, the restaurateur behind The Ivy, who acquired it from founder Bill Collinson. The concept is a hybrid of a restaurant and a modern indoor fruit and vegetable market selling produce to shoppers and diners alike, but when we were there it felt very much restaurant, with the shop aspect being secondary. I’d be interested to go back in the daytime and see the shop concept in action.

There’s a lot going on with the décor in Bill’s. Tables and chairs are an eclectic mix of styles (Mr W reclined at one end of a large leather sofa whilst I perched on a metal chair), the ceiling has exposed ducts and pipes, the walls are adorned with shelves of all sorts of produce and the like, various hand written blackboards advertise specials, the website and the shop facility, and bunches of dried chillis hang from the ceiling. It could look as if it’s trying too hard, but it actually really works – especially with the fairly ambient lighting (which didn’t help my photography!) Tables mostly look out into the arcade or into Mill Lane, and there are some outside tables on both aspects, which will be lovely for the summer.

The menu is a nice balance between modern, innovative dishes and quirky takes on home-cooked comfort food, like macaroni cheese, fish finger sandwiches and fish pie.

To start, we shied away from the starters selection and instead delved deeper into the ‘Breads etc.’ section – which was actually a selection of sharing dishes. We chose breadcrumbed cod cheeks, which turned out to be an enormous portion, with an even more enormous helping of tasty tartare sauce, and mini Cumberland sausages, glazed with grain mustard and honey, again a generous portion of what I’d be more inclined to call medium-sized sausages! 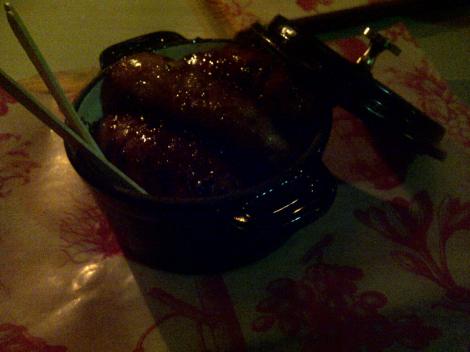 The cod cheeks were good, but the sausages were delicious! I’m not a massive fan of sausages, so don’t have a huge range to compare these with, but these were certainly amongst the best I’ve ever tasted – probably thanks to the sticky glaze, which was absolutely lovely! I could have made a meal of these on their own.

For the main event, I chose panfried sea bream with a pressed tagliatelle cake, and another accompaniment, the menu description of which didn’t exactly make sense, and was actually two accompaniments – a slaw which I think had fennel, spring onions and red pepper in it, and a salsa verde of basil, coriander and mint. The fish was excellent, cooked very well. The tagliatelle cake was not what I was expecting and was really just some pasta ribbons (wider than what I would expect for tagliatelle) in the bottom of the dish which looked as if they had maybe been lightly fried. The pasta was nicely cooked, though, and worked a treat with the salsa verde. It was a nice light, summery dish, with some great flavours, and a good option for anyone who doesn’t fancy the heartier options on the menu.

Mr W chose marinated chicken skewers, which were served with couscous, tzatziki and pitta bread. The chicken, couscous and tzatziki were excellent, but the pitta bread was a bit of a let down – pasty white, and barely shown a grill, so it was flat, doughy and uninteresting. We’d have liked it to have been grilled or toasted so it puffed up and was a bit more crispy – but you can’t have everything!

We fancied some chips, and ordered a portion of skin on fries – the other option was skinny. The skin on ones weren’t particularly fat, but were nice and hot, crispy on the outside, well seasoned, and fluffy on the inside.

To finish, we were brought the ‘Tea Time at Bill’s’ menu, which featured all the puddings from the main menu, plus cakes, cream teas and other teatime delights. Mr W chose Lamingtons (although only received one!), which immediately made me attempt an impression of Madge from Neighbours, which you are thankfully spared as it doesn’t translate into the written word. The Lamington was a moist, jammy, coconutty morsel of deliciousness – it would be just right with a cup of tea in the afternoon too. 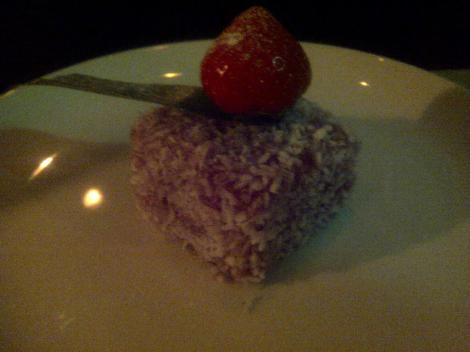 My dessert combined three different puddings into one – a lemon meringue cheesecake in a glass, with yogurt ice cream. I queried where the ice cream was when it arrived, as I expected it to be on the side, but it was included within! Working up from the bottom, the glass contained a biscuit base, a layer of vanilla cheesecake, a layer of lemon curd, a dollop of ice cream and a topping of soft, fluffy meringue. The variety of tastes, textures and temperatures going on could have been too much, but actually worked really well – a lovely end to the meal.

Lemon meringue cheesecake in a glass, with yogurt ice cream

Service was exceptionally friendly and enthusiastic, and although we had to chase up a couple of ‘extras’ (jug of water and portion of chips) these minor issues were resolved quickly, with the chips being taken off the bill, without our asking, as soon as we flagged that they were missing. Anything that was lacking in efficiency was more than made up for in enthusiasm. Sadly, the company sees fit to add an optional, discretionary service charge of 10%. My views on this are for another day, but suffice it to say, I think it’s unnecessary and ultimately detrimental to the staff and the customer.

The selection of wine was small but varied, with prices skewed towards the higher end – only a few choices of red and white under £20, but we had a nice bottle of Chenin Blanc that wasn’t too dear. It was quirkily served in an ice bucket made from an olive oil can.

Wine – in an olive oil can!

I really, really enjoyed Bill’s. Our meal, including wine and the service charge, cost £60. The food isn’t perfect, but it’s pretty damn good, especially for a busy chain. It has a lovely atmosphere, attentive service, a great menu (I’ve got my choices for my second, third and fourth visits already planned out!) and an interesting concept. It has things in common with Jamie’s Italian and Carluccio’s in terms of the shop concept, and Browns in terms of the mix of dishes on the menu, but I actually think I like it more than any of the above! The marketing majors on ‘Bill’s for Breakfast, Lunch and Dinner’ and the breakfast menu in particular looks really tempting too (first and second breakfast visit choices are definitely sorted as well), plus they have a selection of cocktails and fresh juices on offer – so, something for any time of the day or night!

One response to “It’s not Bill’s, it’s MINE! – Restaurant review: Bill’s, Cardiff”