It’s rare for me to blog twice about somewhere, unless the restaurant in question is running a special event, or something significant has changed since the first time I reviewed it. The latter is the case with Pier 64, the wine bar and steakhouse on Penarth Marina.

On my first visit, I was impressed by the location, the quality of the food and the service (albeit there were some teething problems). Not so impressive was the fact that if you order a (far from cheap) steak, that’s exactly what you get: a steak – with side orders, sauces and even chips attracting an extra cost. Also disappointing was the fact that, due to licensing restrictions, the outside terrace – with its lovely sheltered aspect looking across the marina – was forced to close very early.

I’m pleased to say that one of those things has changed – and our most recent visit (there have been a few since our first) was very different as a result.

Pier 64 has also recently launched a Facebook application allowing customers to book a table via social media. We actually used the more traditional option of the telephone (Mr W was in charge of booking and he’s not on Facebook!) but I’ve had a look at the app and it’s a really good idea – I’m not aware of anywhere else in the Cardiff area that has anything similar as yet. There are two Pier 64 pages on Facebook, though, so it took me a while to find the app – it’s the one called ‘Pier 64 Wine Bar and Steakhouse’ that you want if you’re trying to find the app!

One of our deciding factors in choosing Pier 64 for our meal that night was that it was a lovely evening, and we hoped to be able to sit on the terrace. Sadly, you can’t reserve tables in the outside space – due to its popularity it is first come, first served (the jury is still out for me on the wisdom or otherwise of this – I can certainly see both angles) but we decided to take a risk and go anyway, in the hope that a table might be available.

Nothing was free when we arrived, half an hour before our 9 p.m. booking, but there were lots of tables on the ‘street’ side outside, so we had a glass of wine out there while we waited. At 9 o’clock, there was still nothing on the terrace, but we were shown to a lovely inside table right by the big, open patio doors, which we thought was almost as good as sitting outside – or at least it was for a couple of minutes until a member of staff came along and closed the doors, telling us that it was a condition of their licence that they had to shut them at 9 p.m.!

Happily, a table almost immediately became free outside and we asked to move to that one – a request which the staff were happy to oblige, but with the condition that the terrace would close at 10.30 p.m.

The view from the terrace

All in all, this is not ideal. Having recently returned from Palma where we sat outside every night until the early hours of the morning, I’d love to think that we could enjoy a meal or drinks at Pier 64 until late into the evening, either sitting inside with the doors open or out on the terrace, but at the moment it isn’t to be – and it’s really not the restaurant’s fault. I’m pleased for them (and for me!) that at least things seem to be progressing in the right direction and hopefully the local residents and local council are starting to see that the clientele who frequent the place are unlikely to be rowdy or disruptive – they just like to enjoy a relaxing al fresco drink on an all too rare sunny evening and watch the world go by!

Before I moved to Penarth, I lived a few doors away from a very similar type of bar/restaurant in Bournemouth, with an outside seating area, which was open until closing time, and I never experienced any noise or disruption. Residents in the Marina who objected to the licensing application would do well to pay attention to the reality of the situation since Pier 64 opened, rather than assuming that having a bar nearby is automatically going to mean an invasion of stereotypical rowdy drinkers.

I’ll now climb down from my soapbox and talk about the food! We steered clear of the steak menu. Although the steaks we had last time were fantastic, I am still loath to pay extra for chips on top of prices that are already high for the area – and also I fancied trying something different.

To start, we shared the charcuterie platter, which was served with bread and butter. This was good, but presented more like a ham salad than a charcuterie platter, as the meats (only three different ones, two of which were very similar hams, plus one salami) were mixed in with dressed salad leaves, cherry tomatoes and gherkins. We still enjoyed it, though, and it was plenty for two to share. Unfortunately, the downside of an outdoor table when night was falling means poorly lit photos – so apologies for those! 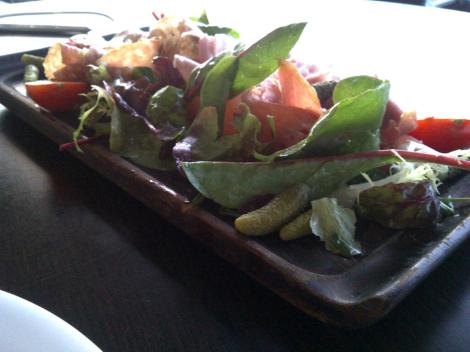 Next up for me was more salad – chicken Caesar, which had an abundance of warm, grilled chicken, plenty of croutons, a few anchovies and a few shavings of parmesan, on top of crisp romaine lettuce and creamy Caesar dressing. The flavour combinations were spot on and the chicken was particularly good. My only slight issue was that there was probably a bit too little lettuce, given there was so much chicken – an all too rare occurrence in restaurant salads where often it’s the other way round, so I really can’t complain!

Mr W chose a burger and chips. He was seriously impressed by the burger – which he had cooked medium rare – and rated it a whopping (no pun intended) 8 on a burger scale of 1 to 10: praise indeed. Chips – or rather ‘french fries’ – were less impressive, and fairly average. I do find it strange that a steakhouse doesn’t offer thick cut chips – or preferably a choice between skinny or fat chips, especially when they’re offered as an extra. What was served was neither one thing or the other, and was therefore a bit disappointing (although helped my waistline – I’m currently trying to follow a low carb diet, but had planned to treat myself to some chips, had they been my favourite chunky ones, but in the event, I decided to pass as I didn’t think it was worth the carbs!)

We didn’t have a pudding on this occasion, but having sampled the chocolate fondant with pistachio ice cream on a previous visit, I can thoroughly recommend that as one of the best chocolate fondants I’ve tried – so I’ll share the photos I took on that occasion, so you can appreciate its gooey loveliness! Also, I took a sneaky photo of the rather impressive cheese trolley, with the cheeses looking deliciously ripe on a warm, balmy evening! 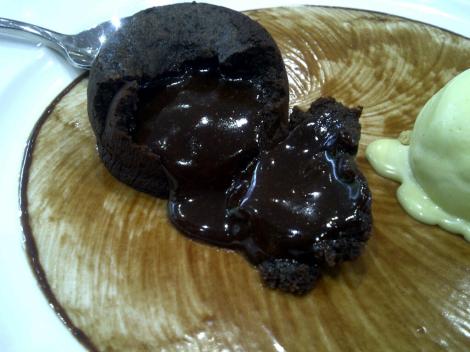 Look at that melting centre!

Look at that melting centre! 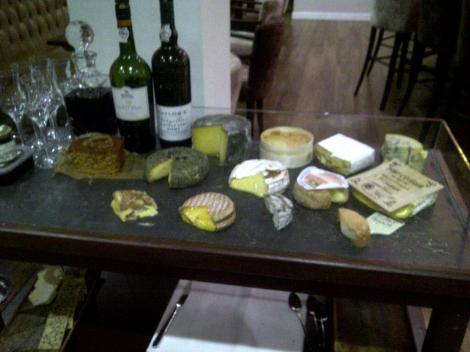 Pier 64 is definitely the best restaurant I’ve tried in Penarth. It’s still an expensive choice for steak (admittedly really good steak!) but it offers a good range of other options, which are much more reasonably priced, and it’s those that now draw me back there. I’m thrilled that the terrace is now more accessible, and I hope that the licence continues to move in the right direction so that one day we can enjoy a drink on the terrace until much later!

6 responses to “The steaks are high…revisited! – Restaurant review: Pier 64, Penarth”