Continuing the French theme of my most recent restaurant review, there were more Gallic goings on last weekend, this time even closer to home in Penarth.

I’ve walked and driven past Café des Amis numerous times during the day and it’s always looked busy and also a pleasant set up, with its quirky French styling and small pavement terrace. I liked the sound of the fact it was open as a bistro during the evening, but had never quite got round to visiting. A deal on one of the numerous voucher sites recently was the incentive I needed, and I signed up for a deal to try six dishes from their ‘Petits Plats’ menu plus two glasses of house wine for £19, rather than the list price of £42.70.

The Petits Plats menu is a bit like French-style tapas – small dishes to be shared amongst two or more people. I liked the idea of this as I enjoy sharing food (it’s sociable and fun) and I like authentic French-style food.

We visited on a Friday evening and the café, although small, was quite busy, with three other tables occupied – but I was a little concerned when one couple, who arrived shortly after us, were told quite sternly by one of the two waiting staff (who I’m pretty sure may well have also been the proprietor) that they needed to order quickly as the kitchen closes at 9 p.m. This was around 8.45, and with it being a fairly drab and dismal evening weather-wise and the place not being packed out, you’d have thought they’d have been glad to have another table of diners in, even if it meant the kitchen being open a little bit later than planned.

The petits plats were all listed on a blackboard, which was brought over to us to choose from. We opted for a tomato, red onion and basil bruschetta, BBQ pork ribs, a wild mushroom filo parcel, chicken liver pate and crusty French bread, patatas bravas and deep fried whitebait with garlic mayonnaise. Not wholly French inspired, but a good selection of dishes nonetheless. The deal didn’t allow us to have bread as one of our choices, so we ordered as an extra some crusty French bread with olive oil and balsamic.

Now, the best way I can describe the way the food was prepared is to say that on the whole it was at best lazy, and at worst an effort to get away with using the absolute cheapest ingredients possible whilst charging prices that are by no means cheap. The list prices ranged from £3.95 up to £5.95 and I can only imagine how high the mark-up must be on these!

My biggest complaint was the bread. It was just like one of those baguettes that you can buy part-baked in the supermarket and finish off at home. And I’d put money on it being the equivalent quality of Tesco Value or Asda Smart Price version. The baguette we had was served with balsamic and some of the thinnest, most colourless olive oil I’ve experienced. At £3.95, and described as ‘crusty French bread’ this was an utter disgrace. The same tasteless, colourless, non-crusty bread featured alongside the pate and also formed the base of the bruschetta.

Some of that disappointing bread

The best of the dishes we tried was probably the pate, which was coarse and tasty (although it was a pity about the bread, and the pate could have done with some chutney to accompany it). The worst by far was the ‘wild mushroom filo parcel’. We found about four small pieces of mushroom in it, and the rest of the filling seemed to be onion and potato. I’m not sure what it was wrapped in, but it wasn’t filo pastry – it seemed like a really bad spring roll, similar to the ones I remember from school dinners: a thick, soggy coating around a slightly slimy filling. It was small and was cut in half – and would have set us back £5.95 had we been paying full price. 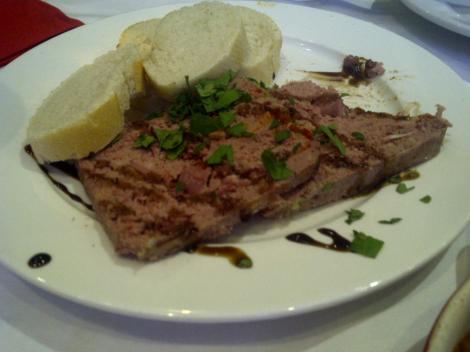 The other dishes were unremarkable. The ‘BBQ’ sauce on the spare ribs tasted synthetic, very much like it had come out of a jar, as did the sauce on the rather soggy patatas bravas. The dip with the whitebait was similarly from a jar, and the bruschetta was just chopped up onion and tomato on top of the aforementioned bread. It was all perfectly edible (with the exception of the ‘filo’ parcel which was quite unpleasant), just very basic, overpriced and lacking in care and quality. 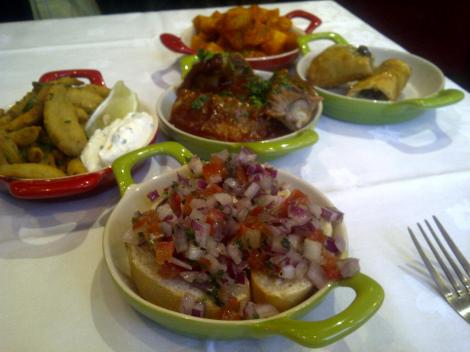 A selection of petits plats – that’s £5.95-worth of ‘wild mushroom filo parcel’ on the far right…

I was desperate to ask the lady that we think may have been the proprietor where they source their bread from, but she disappeared to a different dining area at the back of the café part way through the evening and sat down with a diner in there, leaving the one other waiter to look after all of the diners. We asked him about the bread, and he just said “I don’t know, I think they buy it in” and didn’t offer to find out for us.

One of the blackboards on the wall advertised a selection of cocktails, and I was keen to try one, but when I ordered, I was told that cocktails weren’t available, as the person who does them wasn’t in. Even more worryingly, another blackboard proclaimed handmade desserts. We didn’t try a dessert, but the ones we could see in the glass counter looked anything but handmade – a large lemon meringue pie and a chocolate fudge cake in foil dishes, which reminded me of Sara Lee frozen gateaux or something from Iceland. The waiter was dishing these up on the counter along with ice cream out of a plastic tub, which again looked very much like something from a supermarket value range! 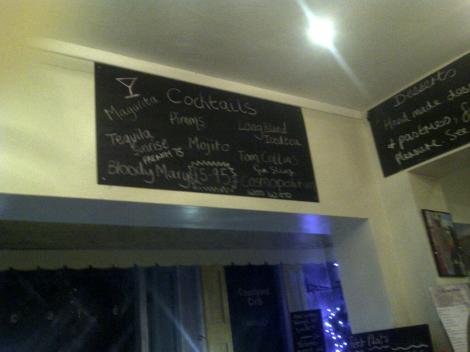 Some of our fellow diners were eating from the a la carte evening bistro menu. To be fair, what they were eating looked quite nice, but we looked at the menu and it seemed extremely expensive for what is essentially just a café that has been spruced up with a few table cloths for evening service, and where desserts are served on the counter out of a foil dish by the waiter. I’d expect more than that if I was paying £18.25 for a main course.

It’s a pity that our food was so disappointing. Café des Amis is in a great location, and I like the idea of a French-style café which turns into a lively bistro in the evening. It’s a small, intimate venue, and there’s a huge opportunity for staff to chat to the diners and create a great atmosphere – but this didn’t happen when we were there. The décor is quirky and definitely has a French flavour to it, but the food we tried was extremely average, corners had been cut when it came to quality, and it was dramatically overpriced for what it was. For somewhere that is clearly trying to be authentically French in its style, this lack of quality is inexcusable – most French people would be appalled by the bread we were given and the synthetic tasting sauces from jars. I have a feeling that as a café in the day time, it may actually be quite good – but perhaps it should stick to what it knows, or at least limit itself to a small number of simple dishes for the evening menu, and try to do them really well, rather than having a large range (if you include the petits plats) which means it’s necessary to cut corners.

Admittedly, we were getting a bargain with the voucher that we had. I know that businesses often lose out in the short term when they run these deals, but the whole point of doing them is as a loss leader – by getting new people in through the door and really impressing them, you may well benefit from their repeat business (and that of the friends that they tell) in the long run. It’s your opportunity to impress people, not to cut corners, offer an indifferent attitude and try to serve the cheapest food you can.