Mention ‘at home’ coffee machines to most people, and they’ll probably think of something that falls into the same bracket as a juicer or smoothie maker: very exciting when it first arrives, but, once the novelty wears off, very quickly relegated, via ‘nice but a bit of a faff to clean’, to the ‘never used because it’s a complete pain in the you-know-where to clean’ category. My old coffee machine certainly met with this fate – and add to that it was a palaver just to actually make a cup of coffee with it, let alone clean it, and it was really, really noisy.

I’d heard very good things about Nespresso’s capsule based system, though – and with Mr W and I both big fans of good coffee, we eventually succumbed and purchased a machine – a Krups Citiz & Milk, which retails around the £200 mark. Nespresso offer 16 different varieties of coffee or ‘Grand Crus’ in their core range, including three decaffeinated options, and we’re still working through the samples of each one that were sent with our machine (with me making – or trying to make – meticulous tasting notes along the way so as to decide which ones to purchase for our ongoing coffee delectation!)

Each of the coffees has an intensity ranking of 1-10, with a few descriptive notes on the ‘menu’ that accompanies them, and guidance on whether it’s best served as a Ristretto, an Espresso, a Lungo, or a milk recipe coffee. So, for anyone who worries that a capsule based system might limit the range of coffees on offer, there’s certainly plenty of choice. I’m quite fussy about coffee, but I’ve already found several in the range that suit me, so I’m pretty sure there would be something for everyone, and the introductory pack that comes with each machine gives you the ideal opportunity to find the one that works for you. They also have various limited edition capsules, especially around Christmas, when apparently some very nice flavoured ones are on offer. As a lover of flavoured coffees, I shall be bulk purchasing these once they become available!

The capsule system – they come in pretty colours too!

One potential downside of the capsule system is that there are only a few retail stockists of the capsules – mainly large department stores in the big cities around the country (there’s not one in Cardiff, sadly) and a couple of ‘boutiques’ (one in Manchester’s Trafford Centre and another opening soon on Regent Street) where customers can enjoy the full Nespresso experience! Other than that, the capsules must be purchased online – with a standard delivery of around two working days. The online ordering system seems very good, and there’s also an app available for most of the main mobile operating systems, so as long as you’re organised and order before you run out, the lack of availability in the shops really shouldn’t be a problem. There is a delivery charge of £4.95 for standard or £9.95 for express delivery, and the packaging used means you must order in multiples of 50 (although you can make this up from different types of capsules which are sold in quantities of 10). Once you’re registered online, you automatically receive membership of the Nespresso Club, which links your orders with any purchases you make in the shops too, and entitles you to partake of a Nespresso coffee in the store after making your purchase. As a marketer who is a sucker for clever brands, I certainly like what Nespresso have done. It’s not just about the coffee, but the full Nespresso customer experience!

The capsules range from 29p each for the standard range up to 35p for the limited edition ones, with a few different price points in between. It’s more expensive than instant, but significantly cheaper than Starbucks!

So, that’s the capsules – what about the machine? Well it’s certainly fair to say that the range of capsules and how to buy them is definitely the most complicated thing about Nespresso! There really is nothing not to like about the Nespresso machine. Ours is ‘Fire Engine Red’ – but it’s available in a range of colours to suit your kitchen decor! It’s stupidly easy to use and even easier to clean. After filling up the water reservoir and clipping it back into place, you simply drop in one of the capsules to the capsule-shaped hole in the top, close the lid and then select whether you want a short or long coffee by pressing the appropriate button. These buttons can even be programmed to your own taste, depending on exactly how much coffee you want to be dispensed with each one. Obviously you need to place a cup underneath the spout – there’s a shelf to accommodate smaller cups, but this folds up, and even my very tall latte cups fit underneath without a problem. My old machine would often continue to drip after making a shot of espresso and I’d come back to find the drip tray swimming in weak coffee. Although this machine does have a removable drip tray, it almost seems redundant, as so far I’ve not noticed any dripping!

The machine – please note essential equipment to the right!

Not all the machines come with an Aeroccino milk heater/frother, but it was a must have requirement for ours, as I am a sucker for a nice latte! The milk goes into a separate ‘flask’ type holder at the back of the machine, and you add one of two attachments – a mixer or a frother – which literally just drops in and magnetically sticks itself to the right place. The attachments also stick to the machine’s drip tray for safe keeping when not in use. Put the desired amount of milk in, up to one of the two lines on the inside of the flask, press on the lid then touch the button on the side, and in just over a minute your milk is mixed or frothed. It can also be used without the heat setting to make milk shakes! With my previous coffee machine, the milk frother/steamer was the most frustrating aspect, as I’d generally end up with froth bursting out the top of the jug, but the milk underneath still lukewarm. The nozzle was then fiddly and annoying to clean. With the Aeroccino system, the temperature and amount of froth is all regulated by the machine – and it’s easy to clean too. It won’t go in a dishwasher, but so long as you rinse it out fairly soon after use and wipe it over with a damp cloth, it’s spectacularly hassle-free to clean. 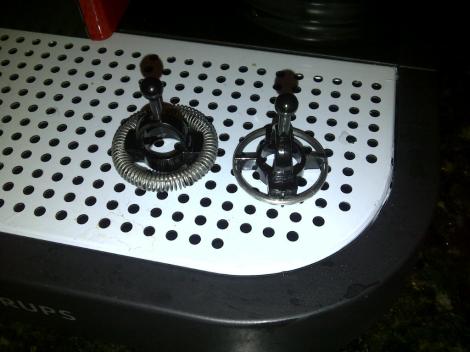 The mixer and frother attachments, safely stowed on the drip tray

As for the coffee section, there’s no cleaning involved at all! The used capsules drop into a hopper underneath the spout, which slides in and out and never has more than a little bit of liquid in the drip tray underneath. They can just be thrown away, the drip tray emptied, and the hopper placed back in. It takes quite a few capsules before it needs emptying, too. If the machine is brand new or hasn’t been used for a long time, all you have to do is allow some water to cycle through it (they recommend 6 ‘long’ cup measures) without a capsule in and it will be ready to use again. The machine feels very sturdy – there are relatively few moving parts and nothing that needs to be forced into place and therefore nothing that’s likely to become loose or a bad fit over time.

This is how easy it is to empty and clean

And it really is that easy! The Nespresso system is a triumph of design and convenience. It looks and feels stylish, and I love the brand, but is certainly not a case of style over substance as it makes some “damn fine coffee” (as Special Agent Dale Cooper would say). Obviously my main experience is of the Citiz & Milk machine, but I’ve used others (in hotel rooms mainly) and they’re equally straightforward, using the same system. We’re definite converts and I’m looking forward to placing my first order and being in the club!

Coming up tomorrow on the blog, I’ll be reviewing ‘Naora’, the latest limited edition capsules launched by Nespresso.

Leave a Reply to Hannah @ Love to Dine Cancel reply