It’s National Vegetarian Week, and with some other food bloggers, I was invited along to a lunch at the Laguna Kitchen and Bar at the Park Plaza Hotel to try some of the vegetarian dishes on their menu.

At this point I should probably declare an interest: although now a confirmed meat eater, I used to be vegetarian. In fact, no meat, fish or animal products (save for eggs and dairy) passed my lips for around 15 years (and this qualifies me to make the occasional joke about nut roasts, having been served enough of them in my time!) Dining out often presented challenges, with a lot of restaurants only offering one vegetarian main dish, often lacking in imagination – which leaves you a bit stuck if you don’t like what’s on offer or simply fancy a bit of a choice! It’s been 6 years or so since I changed my ways, but I still seem to be making up for lost time, and rarely – if ever – order a vegetarian option off a menu when dining out. Although I saw a significant improvement in the way the majority of restaurants catered for vegetarian diners during my time as a vegetarian, I think my subconscious still harks back to the days of tucking in to the ubiquitous broccoli bake or spinach cannelloni whilst my fellow diners enjoyed something altogether more interesting, and as a result I tend not to even consider the vegetarian option.

So, I was looking forward to a bit of ‘enforced vegetarianism’ at one of my favourite Cardiff restaurants to see how far things have come. One of the biggest factors in my decision to renounce my vegetarianism was the realisation that I was ‘missing out’ – but perhaps things have gone full circle and my new-found aversion to anything without a dead creature in it is also causing me to miss out!

We started our meal with a selection of chef’s canapés, which comprised two different types of potato cone, a gazpacho shot and a house salad in a chicory leaf. The potato cones were almost like a wafer in texture – one filled with chickpea puree and tomato, the other with potato mousse with chilli and mint. These were both very tasty but I think I marginally preferred the chickpea one because I love hummus.  The gazpacho was deliciously refreshing and had a definite liquid consistency (important when presented in a shot glass with no spoons immediately to hand!) and the salad was beautifully summery, with peas, green beans asparagus and samphire piled high (which did make them a little difficult to eat in a ladylike way – or perhaps it was just me!) 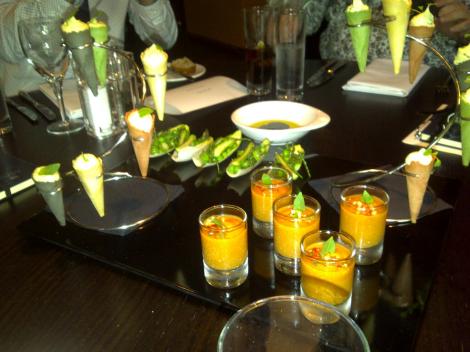 Our starter was a salad of Heirloom tomato (so called because they are grown from old seeds), buffalo mozzarella from Naples and avocado, with micro basil and extra virgin olive oil from Greece (appropriate, given that the Olympic torch relay was a hot topic of conversation at our table!) This was a delicious dish, made even more so by the fact that all of the ingredients were at room temperature. As one of my fellow diners remarked, there’s nothing worse than tucking in to a tomato salad, only to have your teeth assaulted by fridge cold (and often rock hard) tomatoes. These, however, were lovely and ripe, as was the avocado, with both being exceptionally flavoursome. There was a good variety of colours amongst the tomatoes too. The olive oil had a lovely sweet taste to it and this was a simple but very effective dish.

Our main was a pea, shallot and ricotta tortelloni served with baby spinach, watercress, more peas and Wye Valley asparagus. This was a delicious dish. I have to admit to raising a proverbial eyebrow when I received the menu beforehand, as I used to find it a bit lazy when restaurants served a pasta dish as the vegetarian main course, particularly if nothing else on the menu had a remotely Italian flavour. When it’s something that a lot of thought and technique has gone into preparing, though, (as opposed to a bog standard tomato sauce), the fact it’s pasta seems almost incidental – it’s just part of a great dish! This pasta was handmade from Italian flour and free range eggs. I do tend to find pasta quite heavy as part of a three course meal, and admittedly the filling of the tortellini was quite rich, but somehow the lightness of the greens lifted it and made it seem almost refreshing. My only complaint was that there was slightly too much for me to finish – and I hate leaving food! Perhaps I should have asked for a doggy bag for Mr W… 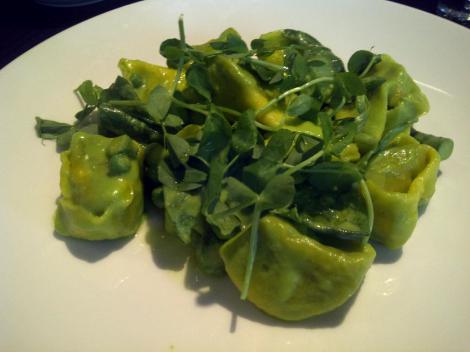 Now, you could be forgiven for assuming that all puddings are vegetarian, but – as I found myself explaining over and over again during my years of strict vegetarianism – a surprising number of sweet dishes contain gelatin, which of course comes from pork or beef. Today’s finale, however, was not only vegetarian, but also gluten free, making it suitable for coeliac diners as well as vegetarians. It was a flourless orange and almond cake with rosewater fruits and Jersey crème fraiche, and was probably my favourite course of the meal. Cakes made with ground almonds instead of flour can often be a bit too dense and heavy after a big meal, but this was very light and unbelievably moist – I think perhaps it had been soaked in orange syrup. Delicate pieces of strawberry and charentais melon steeped in rosewater complemented the dish, and before I even tasted the Jersey crème fraiche (which comes from cows in a small family-run business in Herefordshire) I could tell it was going to be good: it had the glossy texture and yellowy hue of proper Jersey cream or clotted cream, and was richer than normal crème fraiche, but still light enough not to make this a heavy dessert.

I was really pleasantly surprised by the vegetarian menu we tried. Maybe I was eating in the wrong places when I was vegetarian, or perhaps things really have come on in the past 6 years – but either way, these were some excellent dishes that could more than hold their own alongside carnivorous options. Would they make me turn vegetarian again? No – I don’t think that will ever happen. But will they make me give more than a cursory glance to the “V” options on future menus I look at? Definitely. I didn’t feel like I’d missed out, and I certainly didn’t feel like I was still hungry – I just felt like I’d had a really good meal!

If you’re a confirmed carnivore, why not celebrate National Vegetarian Week by trying something different? You just might like it! I’d certainly recommend Laguna Kitchen and Bar to the discerning veggie diner – or for anyone who has a vegetarian diner in their party who doesn’t want to miss out on some good food – or make their carnivorous fellow diners miss out either for that matter (I do happen to know that they do an excellent steak too…!)

Just to pre-empt the inevitable questions, as for why I originally became vegetarian and why I ultimately changed my mind – that’s a story for another day and another blog post!

I attended the National Vegetarian Week lunch as a guest and as such my meal was complimentary. Many thanks to Laguna Kitchen and Bar at the Park Plaza and Working Word PR for inviting me.

One response to “And not a nut roast in sight – Restaurant Review: National Vegetarian Week lunch at Laguna Kitchen and Bar, Park Plaza, Cardiff”