We recently made a plan to meet up with my parents for lunch, and were looking for somewhere approximately half way between home in South Wales and theirs in the New Forest. Trowbridge in Wiltshire seemed to fit the bill, so I asked a friend who lives nearby for restaurant recommendations and she immediately suggested the Tollgate in the village of Holt, which is between Trowbridge and Bradford-upon-Avon, and was swiftly booked as the venue for our lunch! 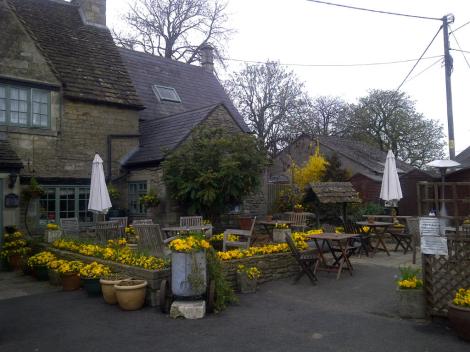 The chef at the Tollgate is Alexander Venables, who was apparently previously awarded a Michelin star, although I’ve unfortunately not been able to find out where this was, so if anyone can enlighten me, that would be lovely. On the outside, it is a very pretty pub, which would be lovely for an al fresco drink or light lunch on a warmer day than when we visited. There’s also a small farm shop in the car park, where we had a browse at some lovely cheeses, pies, pickles, fresh eggs, bread and meats. 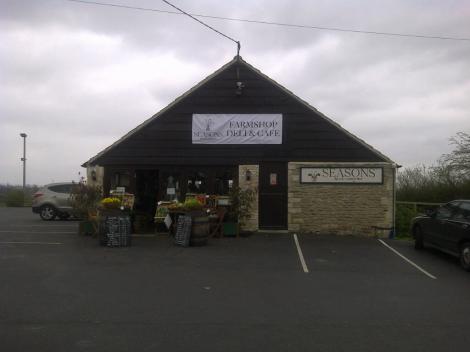 The farm shop - and a very stormy sky!

Our lunch table was in the bar area. Although there is a restaurant, it didn’t seem to be open, but the bar was full, mostly with pre-booked tables, so I’d strongly recommend booking if you plan to visit, as you could easily be disappointed. It could also be a bit of a disappointment if you wanted to just go in for a drink, as there wasn’t an awful lot of space that wasn’t taken up by diners! Fortunately, we had a really nice table with bench style seating down each side and lots of space for the four of us, but some of the tables in the bar area did seem cramped, and the whole place had a bit of an overcrowded feel – but on the plus side it had a nice atmosphere because it was busy. The Tollgate’s website, or rather a quote from Micheal (sic) Winner, describes it as “the quintessential English inn”. I do find that ‘quintessentially English’ is a bit of an over used phrase, but in this case it did describe the place very well – it’s a very traditional pub style venue, albeit the dining style, and the way that the tables in the bar area are set up, is much more restaurant-like in style.

When the menus came, we were a bit blown away by the choice that was available! As well as a three course set lunch menu (served Tuesday to Saturday), there was a range of light lunch options, plus a full a la carte selection. It all sounded excellent, and there were many innovative dishes and unusual takes on more traditional fare to tempt us.

Three of us decided to go with the set lunch, and we all plumped for a ham hock terrine which was served with buttered white toast (lovely – and nice to have something simple rather than some of the fancier breads that often find their way on to menus!), a small salad and some onion chutney. The terrine itself was chunky and tasty, and had pieces of date and apricot mixed in with the ham, which was nice, but not to everyone’s taste, and perhaps not entirely necessary alongside the chutney, but all in all we all really enjoyed that dish.

To follow, Mr W and I both chose a salmon and haddock fish cake, served with hollandaise, a perfect soft poached egg and a drizzle of pesto, which was a nice touch and a good contrast with the creamy hollandaise and rich egg. It was a great example of a fish cake too – clearly hand made, lots of fish, and only minimal potato. There were also a few peas mixed in! 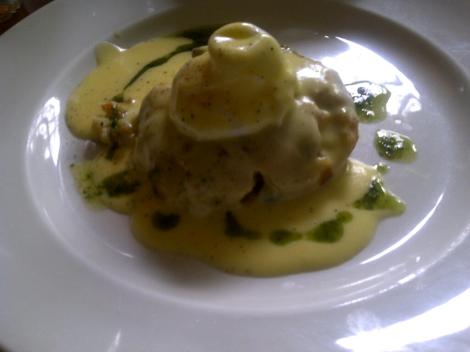 My Dad chose a chicken dish, and to my shame I can’t recall the exact description, but I seem to remember it having a Thai chilli flavour to it. It was served with a mixed salad, and all three of our main courses came with a selection of vegetables, including new potatoes, carrots and parsnips. The latter were a tiny bit disappointing as they were just boiled, and for me, parsnips need more than that to bring out the flavour, but the rest of the veg were lovely.

Chicken from the set menu

My Mum decided to go for an option from the light lunch menu, and chose Eggs Benedict with smoked salmon. This is what was listed on the menu, but in fact it was Eggs Florentine, as it came with spinach, rather than ham (the description stated spinach as well, so it was obviously just some naming confusion!) The smoked salmon was an optional extra, and the dish came with a generous helping of hollandaise. She really enjoyed it – and the eggs and hollandaise were as good as the ones Mr W and I enjoyed with our fish cakes.

It’s at this point that this particular blog becomes heaven for pudding lovers, as we all had a different one, so there now follows an array of pudding pictures! Dad and I sampled the two set menu desserts. Mine was a lemon and lime posset served with a berry coulis. This was deliciously refreshing whilst also being creamy and satisfying, and a very generous portion, so there was none of that feeling of being a bit short changed which is sometimes the case if you go for a fruity dessert whilst others are tucking in to hot puddings! Dad had bread and butter pudding, served with custard, which also went down very well.

Mr W chose a rice pudding off the a la carte dessert menu, and this was the only slight disappointment. Despite being served in an individual dish, it had no crispy skin on top (in our opinion, the best part!) and was a bit too liquidy for our liking. It also came served with a dried fruit compote, which was really just a large bowl of mixed dried fruit. It didn’t seem to go with the rice pudding and was left largely untouched. 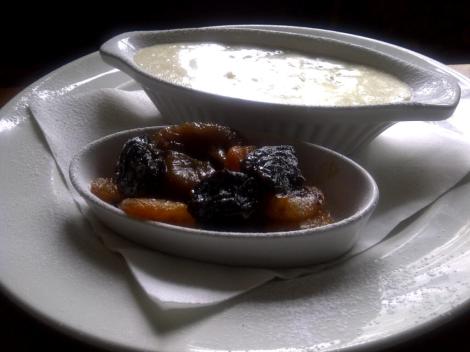 Mum’s pudding, again from the a la carte, was the stand out dish of the day – a sticky toffee pudding served with caramel ice cream, which couldn’t be faulted at all. Fortunately, she has the smallest appetite out of the four of us, and insisted that we all helped her out with finishing it, so we all had a chance to enjoy it! 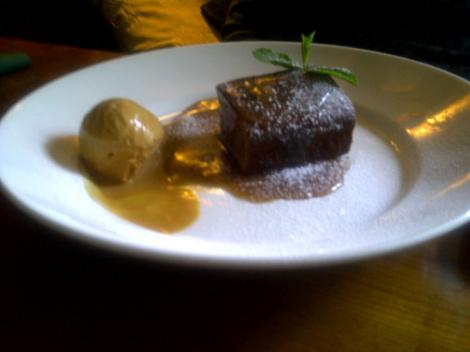 Throughout our meal, the service was friendly and helpful, and we were made to feel very welcome, although we were a bit disappointed to discover that the Tollgate closes at 3 p.m. – not only do they stop serving food, but the doors close, and it’s a case of ‘everybody out’! Had we realised this, we might have booked our table a little bit earlier, as we like to take our time over a meal and sit and enjoy a drink afterwards. As it was, and as we were only made aware of this when we tried to order more drinks at five to three, we ended up feeling a bit rushed, hence only three stars for service, rather than the four I would have given otherwise.

We’ll definitely be returning to the Tollgate. The food was excellent and there’s lots more on the menu that I want to try! The set lunch was very good value, at £17.95 for three courses, £15.50 for two and £12.95 for one (so not such good value if you just have one course!), with light bites coming in around the £9 mark, and main courses on the a la carte ranging from £13.50 up to £17.50. A la carte puddings were closer to the £6 mark. If I was ordering three courses from the a la carte menu, I’d certainly want to be sitting in the restaurant area rather than crammed into the bar, but for a relaxed lunch, the bar was fine. There’s also a Sunday set lunch and a set dinner menu available.

2 responses to “A plethora of puddings, and a lot more besides – Restaurant Review: The Tollgate, Holt, Wiltshire”