Homewood Park is a country house hotel just outside Bath. It’s part of the Von Essen group of hotels, and also holds the slightly less well-known distinction of being just about equidistant between where I live and where Mr W lives. On the rare occasions that individual social plans have prevented us from spending the weekend together, we’ve used the Lime Restaurant at Homewood Park as a venue to meet up for Sunday lunch, and we did just that a couple of weeks ago after I spent Saturday night otherwise engaged at a close friend’s hen party.

Lime Restaurant has an impressive fine dining menu, with dinner in the evening costing from £55 per head, and a wine list to match, price-wise. On previous visits, we’d been really pleasantly surprised to find comparable cuisine served for Sunday lunch at a much more reasonable price of around £20 per head. It is nearly a year since we last dined there, but we were quite surprised to discover that the three course Sunday lunch menu (with no option to have two courses) had gone up to around £30 per head, which seems like a significant increase – perhaps in light of Von Essen’s recently publicised financial problems?!

We started with a drink on the lawn outside, which has a few tables dotted around, plus croquet hoops set up for those who want to have a go. My footwear was not conducive to this and would have resulted in aerating the lawn, but Mr W did have a bit of a knock about! The grounds of Homewood Park are absolutely beautiful, with a stunning variety of different trees, flowers and shrubs on show, and a few more secluded areas of the garden surrounding the lawn. Although the hotel is on a main road, it’s accessed via a fairly long driveway, and the lawn is far enough removed from the main road that it doesn’t suffer from traffic noise. We were brought a variety of snacks, including some delicious honey-roasted cashews and some vegetable crisps, to complement our pre-dinner drinks, which were most welcome after a long drive to get there! We also had a look at the menu while we sat and enjoyed the sunshine, and one of the waiting staff came to take our order outside too, only calling us in when our food was nearly ready.

Snacks on the lawn

The dining room is very traditional, in keeping with the rest of the hotel. I should really say dining rooms, as there are two or three separate rooms, which I believe can perhaps be opened up in to one if required, but on this occasion we sat in one of the small rooms with just one other table of people – which can sometimes be an uncomfortable situation, but wasn’t too bad.

To start, I chose pressed ham hock, served with confit pork belly and a rhubarb and apple compote. This was absolutely excellent and very nicely presented on a slate. The tangy compote was an excellent companion to both cuts of pork. 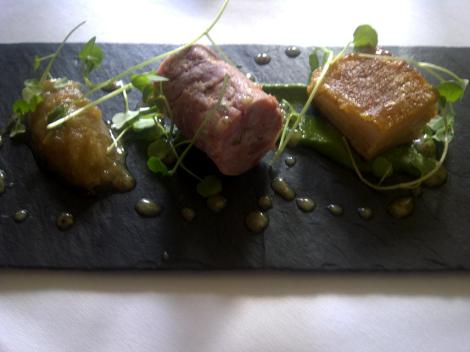 Mr W opted for mackerel, which was served with a vegetable slaw, and unfortunately his starter was quite disappointing. Mackerel is normally strong flavoured and quite meaty, but this was bland and a little watery in both flavour and texture, and the vegetable accompaniment did nothing to make it more exciting. We both agreed that I’d done much better with my choice of starter. 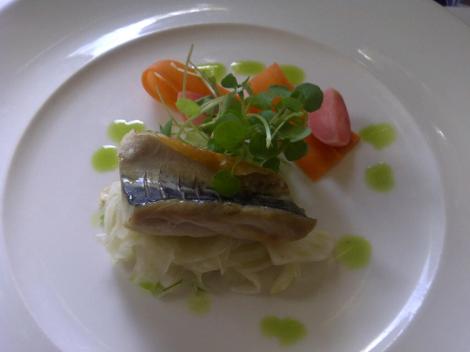 For our main courses, we both chose a roast – beef in my case and pork for Mr W. Other menu options were a fish dish and a vegetarian option. Having eaten there before, we were expecting a more stylised take on a roast – previous meals had been small taster portions of each of the components of a dish, sometimes with something served in a shot glass or other unusual presentation item, so we were quite surprised to be presented with what seemed to be very traditional roast dinners (save for a very small ‘smear’ of some sort of orange coloured puree, which was so small it was barely worth bothering with, particularly in light of the generous portions of the other items on our plates).

We both enjoyed our roasts, which were good (Mr W’s pork crackling being a particular highlight!), but certainly not outstanding and not on a par with what we had a few months ago at The Mill, which was a similar price and one of the nicest roast meals we’d had in a restaurant. One specific, although minor, complaint for me was a distinct lack of gravy. What was on the plate was quite thin, and seemed to be instantly absorbed by the potatoes and Yorkshire pudding. Even when we asked for more, which duly came in a jug for the table, it seemed to disappear as soon as it went near any of the other food on the plate! 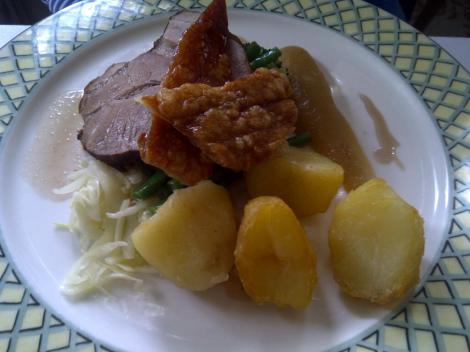 For dessert, I chose a lemon tart, served with pistachio ice cream. The pistachio ice cream was excellent and had a really lovely flavour, which went surprisingly well with the tangy lemon. The filling of the tart was similarly good, but sadly the pastry was soggy, so I left that. 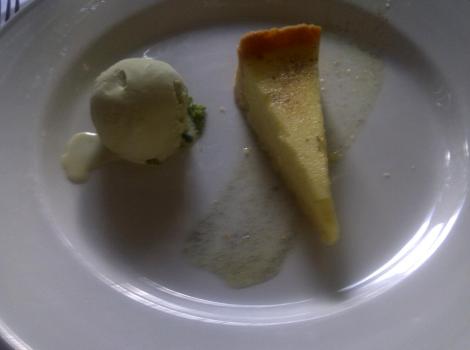 Mr W chose a chocolate mousse, which came with crushed honeycomb and a shortbread biscuit, which also seemed to be flavoured with pistachios. The mousse was very dark and extremely rich and chocolatey. It went well with both the honeycomb and the shortbread, but probably didn’t need both, especially given that the shortbread was quite ‘claggy’ (not necessarily a bad thing!) and there just didn’t seem to be enough of the chocolate mousse to counteract that as well as contrast with the crunchy honeycomb. 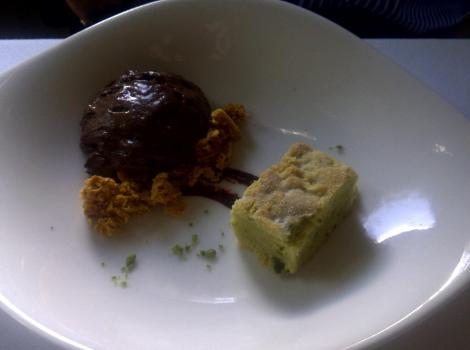 Chocolate mousse with shortbread and honeycomb

It’s fair to say we had a number of minor gripes with the food, but overall it was a pleasant meal, although not outstanding, and probably not worth the £30 a head that we paid, when compared with comparable experiences for Sunday lunch, and especially given that a year ago we had a better, more special meal for a lower price at the same venue. It’s also worth noting that the price doesn’t include coffee, and a cappuccino or double espresso at the end of your meal will set you back £5.50, with tea being only marginally more reasonable at £4.50. Even a small diet Coke was the princely sum of £3.

The service was efficient, but fairly unmemorable, and not always hugely attentive, particularly later on in the meal, and there were a couple of issues with the ambience in the dining room itself. Firstly, there seemed to be a number of flies buzzing around which we had to swat away while we were eating, and I remember this having been the case on previous visits as well (some things don’t change in a year!) Secondly, there was some background music being played in the area, which was very pleasant, but half way through the meal we could also hear what sounded like someone tunelessly playing a violin, over the top of the existing music. The other diners in our room also commented on this, and actually asked the waiter about it, who said that there was a child in the next room giving some kind of violin performance to diners in there. Sure enough, we later saw a group of people that included a child carrying a violin case. I’m not sure if this was perhaps a private party in one of the other rooms, but the noise was quite intrusive and went on for quite a long time.

On the plus side, ambience wise, it really is a gorgeous location (which would get five stars were it not for the flies and the tuneless violin), and after lunch we sat out on the lawn again and then had a wander round the beautifully tended grounds. I probably would go back to Homewood Park again just to enjoy this, but would think twice about Sunday lunch and would instead maybe consider having afternoon tea on the lawn if it was a sunny day. We saw several people doing this and it looked very good, so perhaps that will be on the menu for our next visit.

Recommended for the location only.