An all too rare sunny Sunday saw us take a bike ride along the coast to Hengistbury Head, a lovely headland to the East of Bournemouth, which features a sand spit that points across the water to Mudeford. At the end of the sand spit is the Beach House Cafe, and this was where we stopped for lunch on Sunday. Don’t be fooled by the fact that the address of the Beach House is Mudeford. You can reach it from Mudeford, but only by boat. From the Hengistbury Head end, you can only get there on foot or by bike – so either way you have to make the effort! But is it worth it?!

Unsurprisingly for a sunny day, the place was heaving, but we only had to wait a short time to be seated. As well as the indoor restaurant/cafe area and a kiosk outside serving drinks and ice creams, the Beach House has a terrace area which is covered by an awning and glass sides, but is a much nicer place to sit than indoors. We were initially seated at an indoor table, but asked whether there was a possibility of moving and the man who seemed to be in charge of front of house said as soon as a table came up it was ours. Happily, this only took a couple of minutes, and we were seated at a terrace table before we’d even had a chance to properly look at the menu. 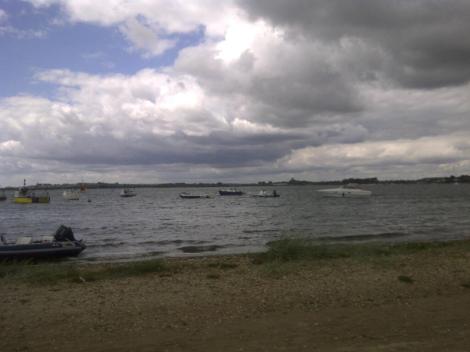 The view from the terrace

The menu is something between cafe and restaurant, with a selection of burgers (including swordfish burger, which the people next to us were having and looked pretty good), sandwiches and salads, plus a few different main dishes such as spaghetti Bolognese and curry. They also serve moules and frites, and we saw some truly enormous portions of moules going past as we chose our own food.

We decided to start with some grilled sardines. These were nicely presented and Mr W thought they were excellent. I’m not a huge sardine fan, so I can’t really comment, but he managed to polish them off with me only having a mouthful or two. 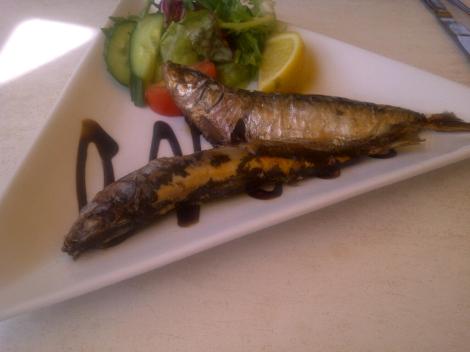 For his main dish, Mr W went for a chicken Caesar salad. This was listed as coming with crispy bacon, but the bacon didn’t look particularly crisp. In fact, to me, as someone who only likes bacon if it’s really crispy, it looked pretty unappetising! Also there was nowhere near enough dressing – in a Caesar salad the leaves should be coated with dressing but in this case they were merely drizzled, so he had to ask for some more. More on that later! Other than that, he enjoyed the salad on the whole. 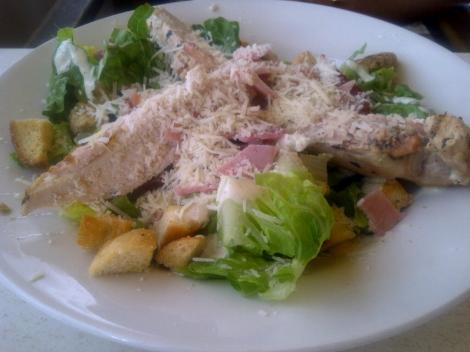 After a lot of deliberation, I opted for fish and chips, which is a favourite of mine. When it came, I was surprised to find the fish was breaded, not battered. There was a large portion of chips (in fact just about EVERYTHING we saw people eating seemed to come with a large portion of chips!) but they were very average and definitely not hand cut or anything resembling home made. Finally, nearly a whole tin (and they were definitely tinned) of mushy peas adorned the plate. It was all rather disappointing, because although the Beach House is first and foremost a cafe, it has a good reputation for food, and I would have hoped for them to produce some really good takes on traditional cafe food, but as it was, nothing we had was really more than average. In fact, looking back at the photo of my fish and chips, school dinners almost spring to mind! It wasn’t cheap either – my fish and chips was £11.95 and Mr W’s main was £10.50. 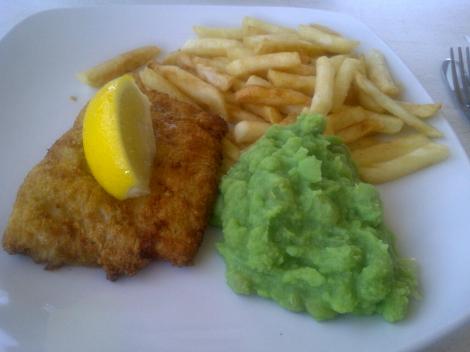 Fish and chips and mushy peas

We did have a very pleasant bottle of their Beach House ‘own’ wine with the meal, which was fairly reasonably priced for a house wine.

We were really impressed by the service we had on arrival from the man on the door, who was friendly, enthusiastic and on the ball, but service wise it was downhill all the way from then onwards. The place has a fairly casual vibe to it, which you’d expect from a beach location, but the staff were taking this too far in attitude and dress. It was difficult at times to identify who was actually working there and who had just wandered in off the beach, and one waitress who served us had a large expanse of bare midriff on show (I’m being polite here – Mr W actually remarked that she had her gut hanging out!) which is not really ideal in a restaurant when it’s going to be at eye level!

Mr W decided he wanted a side order of chips with his main course, which admittedly he should have ordered at the time, but instead he asked for them shortly after our main courses arrived. With all the chips that were on the go with every meal and no doubt being churned out on a production line in the kitchen, this should have been a quick request to fulfil, but it wasn’t. At the same time, he asked for extra dressing to top up the stingy portion that had been drizzled on the aforementioned Caesar salad. We then had to ask twice more (once to the same waiter we’d ordered them from originally and once to someone else who did then bring them quite quickly) before they arrived, by which point he’d eaten about half of his salad. Similarly, with a second drinks order, we had to ask a couple of times before the drinks arrived. There seemed to be no method to the way the staff were working, which is not a good idea when the place is so busy as things do get overlooked and forgotten.

On the plus side, the location of the Beach House is beautiful, it’s a pleasant trip to get there whether you approach by land or sea, and it did feel a bit like we were on holiday. Some people may feel that the relaxed attitude of the staff is in keeping with this, but to me, disorganised staff actually makes the place feel more frantic and hectic (and with a couple of completely undisciplined screaming children thrown into the mix – thankfully far away from our table, it did all end up feeling a bit stressful!) I was also disappointed that the food wasn’t better – it’s a simple menu, so they have the opportunity to do simple food really well, but instead it seems to be about volume rather than quality.

I would go there again, but probably just for the location and to enjoy a drink or maybe coffee and cake – which I’ve done before and always really enjoyed the sweet treats on offer.

Only recommended for the location.

5 responses to “The quest for good food at the beach continues – Restaurant Review: The Beach House, Mudeford”